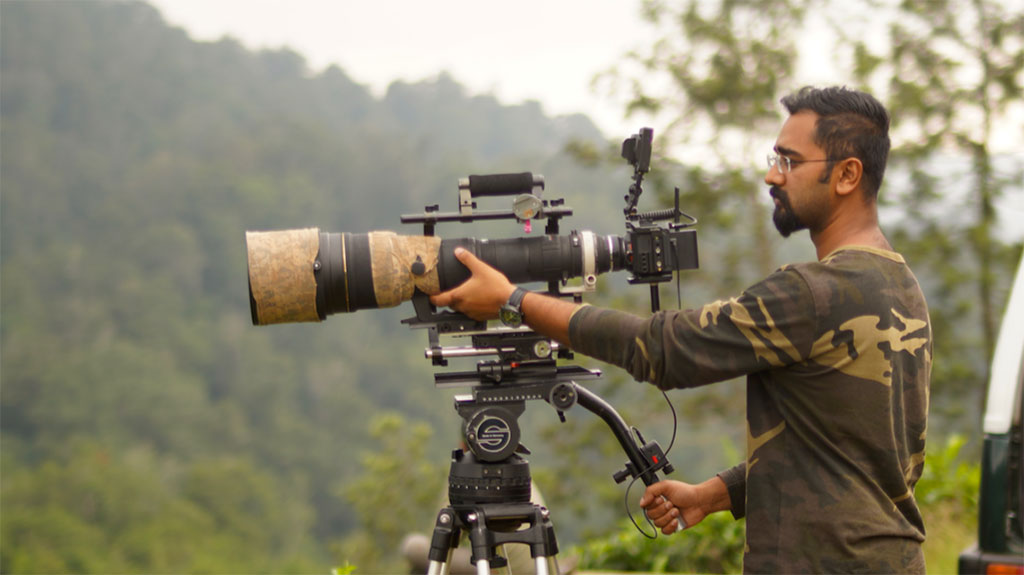 Wildlife photography and filmmaking is considered a common enough hobby these days, people know about it and there is a lot of information out there. I am one among a lucky few people in this country who gets to do this full time, for that I am forever grateful. But when I got into it, about a decade ago, it was still considered a fairly uncommon career choice, and there were only a few people in India doing it at the time. Information was hard to come by, so were role models. Things are changing now.

I have had the privilege of travelling and filming in a wide range of landscapes across India, from dry high altitude deserts in Kargil to the seas of Rameshwaram, from the subtropical rainforests of Meghalaya to the salt pans of Gujarat. I have been all over the place, but if there is one location that has always enchanted me like no other, it would be the evergreen rainforests of Agumbe in Karnataka.

The rainforests of Agumbe have a near mythical reputation because it is a notoriously wet place, overflowing with leeches, home to the world’s longest venomous snake, the King Cobra. I have had the opportunity to shoot two different documentaries there.

The emotions a rainforest ecosystem evokes is unique and differs for every person. Being in a rainforest is a nonstop attack on the senses—the incessant rain, the 100% humidity in the air, the orchestra of the insect sounds both on the forest floor and all around you in the trees, the leeches climbing up your body and subsequent bites—it can all be a little much for the uninitiated. I have seen city-people feel overwhelmed by the wildness of this particular rainforest. They usually retreat to the safety of their rooms after spotting the first leech.

For me, a rainforest evokes a sense of wonder. The sheer amount of biodiversity in a small patch of the rainforest is mind-boggling. Apart from big mammals, there are a plethora of small creatures in a rainforest: insects, snakes, amphibians, fungi, and so on. I am always wowed by the spectacle of a rainforest, especially during the monsoon.

One of the creatures that caught my eye in Agumbe was the Malabar pit viper. It is a small to medium sized, very handsome, venomous snake, with pits in front of its snout to sense heat. In other words, these pit vipers have heat vision, with which they catch their prey. The cool thing about this snake is that they come in many colours—yellow, green, brown. They are everywhere too, sitting and waiting for prey to come close to them. The Malabar pit viper is one of my favorite things to spot in Agumbe.

I travel to these places with my colleagues—my team members from Evanescence Studios. We usually travel in small teams of three, together we are a full filmmaking unit, sometimes even finishing edits on location (on our laptops) to maximize our efficiency. As documentary filmmakers, we work closely with scientists and naturalists who study the landscape and the creatures that live in them. Conversations with them are the most interesting, since we get to hear stories from people who spend years in the field. They have amazing insights as to why animals behave in a certain way, and broaden our understanding of the subjects we have come to film. They give us clues and leads, which we then follow up, in the hopes of getting some of that rare or unseen behavior on camera.

I have filmed two documentaries in Agumbe, the first one was an educational/instructional film aimed at a very specific group of people.

There are numerous people in India who consider themselves Snake Rescuers. They respond to snake rescue calls and step in to remove snakes that have entered a household. They are usually young people without training, usually with no systems in place to remove the snake. They use any method, like the swiftness of their hand, or luck, to get the job done. Many of these rescuers are bitten in the process and die.

The documentary Snake Rescue – The Expert Way shows rescuers the professional way to rescue snakes, without causing harm to the snake and themselves.

The second film I made in Agumbe is Mysteries of Monsoon. It is a film that showcases some of the lesser known creatures in one of the wettest rainforest in the world, during the monsoon.

Usually when one is filming and it starts to rain, it is time to pack up, sit back and enjoy the rains with a hot beverage, because it is near impossible to film in the torrential rain in an Indian rainforest. While working on this documentary, we decided to do the near impossible and film specifically in the rain, to showcase the spectacular rainforest and show things people might have never seen before.

Wildlife filmmaking is all about waiting for the right moment. The right moment can happen the minute you reach your location, or it might take days, weeks, even months. It is a mind game and the name of the game is patience.

We were trying to film the emergence of cicadas for Mysteries of Monsoon. This behavior, at least to my knowledge, has never been filmed before as a sequence in India. It was filmed by the BBC for the iconic film Life in the Undergrowth in the United States, where billions of cicadas emerge from the ground after 17 years. The species we were targeting come out once in a year, and they come out only one at a time. Even though people had pictures and small video clips of this behavior in India, there was no sequence or film about it, probably because of the unpredictability of the emergence. No one had really spent the time to observe the emergence and capture the entire process.

Luckily, my friend Vipul and his wife Catherine who are both expert naturalists, had seen this behavior before. They were kind enough to help us with the process of finding the cicada nymphs.

As with any filming assignment, nothing ever goes according to plan. It was early September 2019, we had just reached ARRS (Agumbe Rainforest Research Station), and were talking to my friends about the prospect of witnessing this rare phenomenon. We were walking around as we spoke, and we suddenly saw a cicada nymph emerging out of the ground.

All hell broke loose. Our bags were still being unloaded from our vehicle, and we scrambled to get our gear ready as the cicada nymph did its thing. The behavior we wanted to film happens only once, and after an hour of gear-assembling and frantic shooting, we managed to get a couple of shots. But we had missed the full sequence.

That evening, we spoke about how bad our timing was. It was a case of The Moment happening the second we reached our location. We waited for days after that, but nothing happened. We managed to get lots of other shots for the film; no cicadas though. Then on one of the nights, we got lucky and managed to film the emergence of the nymph after hours of waiting.

After the cicada nymph emerges from the ground, it climbs up a tree and comes out of its nymph shell/husk. This happens over a half-hour time period or more, depending on factors such as humidity, lighting conditions and the individual nymph itself. I had the time lapse of the nymph emerging with a stills camera, but because of the position the nymph had crawled into, I did not have the space for a second camera for filming that same behavior. The cicada emerged and went away. We had spent many days trying to film this behavior, but we had run out of time and had to return back to Chennai, with an incomplete sequence.

We came back to Agumbe in a couple of weeks to shoot all the sections of the film populated by people. I was still on the lookout for the cicada to finish my sequence. However, nothing showed up. After a couple of days, most of the filming was done, and soon we had to make the decision to wrap up our shoot and head back for good.

We were returning to our cottages after dinner one night, the rain had just stopped, the conditions were just right, and I casually went to check on the same tree before going to bed. There I saw it, a lone cicada coming out of its shell! I ran to the room to get my gear, my team running right behind me to set up lights and other cameras. We managed to film the emergence on two cameras, with close-ups, wide shots, macro shots… the works. We finally had a full sequence. The satisfaction of putting together the sequence on the edit table and watching the whole thing come together was equally exhilarating. There are many such stories, but this is the most recent and memorable one.

In the future, I see myself making many more films like these, both to educate and entertain people, to get them thinking about wildlife in India and the world over.

All pictures belong to the author. They may not be reproduced without permission.

Sripad Sridhar is a wildlife and documentary filmmaker based out of Chennai, India. He has directed, photographed, and edited numerous documentaries that have helped India’s leading wildlife conservation organisations represent and further their research. He has shot for international brands such as National Geographic Channel, Netflix, Animal Planet, and many more. He enjoys teaching filmmaking when he is not travelling on shoots.