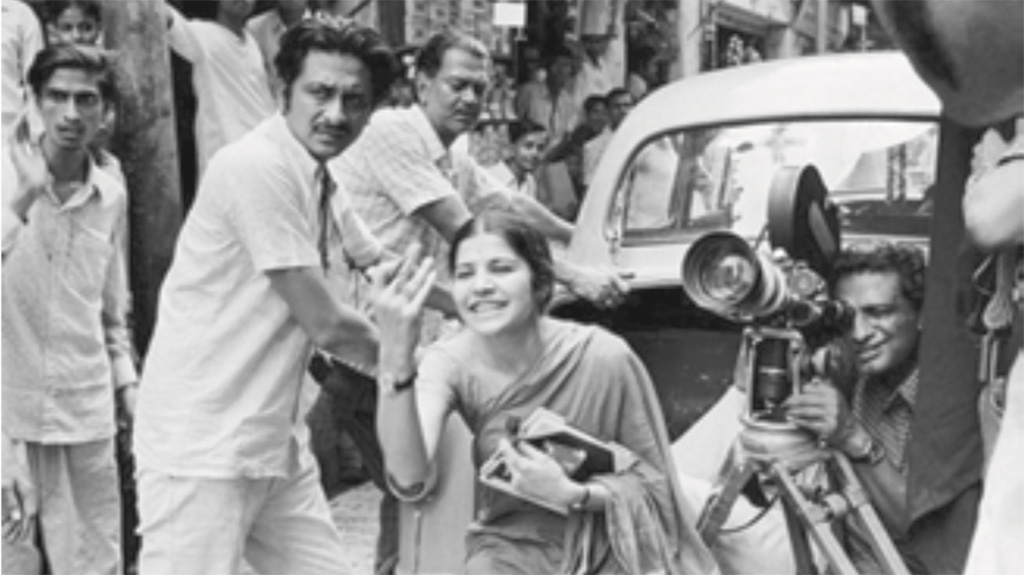 From his very first film, Pather Panchali, Satyajit Ray enthralled his audience with a cinematic vision and language that was almost, though not entirely, unknown to the Indian audience. Not only for the craft or the depth of linear narrative viscosity but also because of the understated, charming and unwavering homogeneity of its acting pattern. Needless to say, there had been actors in Bengali cinema prior to Pather Panchali who adorned the screen with princely star appeal. Quite a few others were supreme actors in the Bengali commercial theatre scene, and uncannily carried over their ‘theatrical’ mannerisms while embracing their lowly placed cinematic concubine. However, it was with Pather Panchali that the professional bloomed with the same freshness as the raw newbie.

Ray was not the first Indian filmmaker to embark on a neo-realistic path though. K. A. Abbas’s Dharti Ke Lal and Nemai Ghosh’s Chhinnamool precede Pather Panchali in style. Yet, in both, the acting pattern relied heavily on accented theatricality to the point of being dismissed as unrealistic by a later day audience. More importantly, the directors of these two films were less occupied in defining an acting grace for their films. They relied almost singularly on the narrative strength of their outpourings; no wonder their films have been forgotten in a rush and left to be lamented by the film historian alone. In the entire Apu Trilogy, Ray worked with nonprofessional actors and newcomers—Soumitra Chatterjee and Sharmila Tagore were introduced by him! They went on to become two of the most revered actors of India, with Soumitra being one of the finest by international standards as well. It was Soumitra who summed up in 1991 the importance of acting in Ray’s oeuvre within the canon of Bengali cinema: “Before Ray, there had been good acting in Bengal, but confined to a few gifted persons. Ray’s achievement is that he made the whole cast act in the naturalistic mode, the novice and the seasoned buttressing each other. He brought stylistic unity to their cinematic expression.”

In between the Apu Trilogy, Ray made Parash Pathar with Tulsi Chakraborty and Jalsaghar with Chhabi Biswas, two of the best actors of Bengali cinema. He admitted quite openly that he wrote scripts of the two films keeping in mind the availability of these two actors, something he repeated in the next decade for Nayak, with the matinee idol Uttam Kumar in mind. Yet, in an interview in 1978, Ray was unduly harsh on his actors in general when he proclaimed: “I envy Bergman’s stock company. In Bengal, or even for that matter, we don’t have professionals of that calibre, no one like Bibi Anderson or a Liv Ullmann. They are brilliant virtuoso performers and Bergman can devise parts for them, where they can show the subtlest of emotions and the strongest outbursts of passion.” This emphatic statement does create a sense of discomfort, a feeling of unease, not only because it was a bit raucous, but also because it was quite simply, concocted. Well, that demands some justification.

In the films of Ingmar Bergman, and Alfred Hitchcock to certain extent, the camera sees the human face as a sea of emotions, a battleground of nerves, a home for mysterious undercurrents. In many of Akira Kurosawa’s films, the human body is a spectacle of drama, a muted exhibition of tension and bravura. It was improbable, if not infeasible, for Satyajit Ray to embrace an exposition so stark, so angry. In his Brahmo upbringing, Ray had been shy, both in his life and craft. Yet this shyness is not a despotic subjugation of talent, rather an absolute confluence of the diverse creative strands of a methodical mind.

That is why, barring a few cases, Ray’s camera doesn’t chase the vibrations behind the mask like Bergman’s, or the rowing ripples of nomadic muscles as in Kurosawa’s, or the psychotic expressionistic shades of the human mind of Hitchcock’s. Rather, Ray prefers to slice up life with extra ease, from a distance, like the old monk sitting high in the canopy. There is an assured peace in Ray’s moments of rest; peace is not necessarily a lack of pace. Rather, it is the certitude of a confident mind.

In an article from 1966 titled ‘Some aspects of my craft’, Satyajit Ray wrote: “I do not think it is important to discuss a part thoroughly with an actor, but if he so wishes, I have no fetish against obliging him. Sometimes, with a minimum of guidance, an actor provides me with exactly what I want. Sometimes I have to try and impose a precise manner, using the actor almost as a puppet.” Around the same time, but prior to writing this article, Ray was directing Uttam Kumar for Nayak, and mentioned to Andrew Robinson, “I never bothered to explain the character to him. So I never discovered whether he really understood the implications of the part. And it doesn’t really matter whether he did or did not… I didn’t discuss the psychology of the part at all. I merely told him that this is what you have to do. Trust me and it should be all right.” Both these statements, in conjunction, refer to Ray’s judgement and outlook when it comes to handling his actors, at least during the first decade of his filmmaking career.

Rummaging through the experiences of different actors in Ray’s films, one can easily mark out a binary: the ones whom Ray directed comprehensively, and the others, for whom he had minimal advice. If the likes of Soumitra Chatterjee, Rabi Ghosh, Shabana Azmi or Om Puri comprise the latter, the former bastion is reserved for Subhendu Chatterjee, Sanjeev Kumar, Mamata Shankar and others. Even Uttam Kumar admitted that he could follow Ray’s instructions partially in Nayak, only to better it in their next joint venture Chiriyakhana.

How did Ray achieve realism in the acting in his films? So much so that a rank newcomer looks as comfortable as a seasoned veteran? The key lies in four truths: unpretentious dialogue, artless settings, minimal makeup, and ‘do when dumb’.

In most of his early films, the real-life backdrop and the actual locale are mirror inversions, thanks to the brilliance of Bansi Chandragupta. The natural balance of the ordinary ecosystem intuitively helped actors to get into the skin of the characters without necessarily trying to act out the role. The uninhibited dialogues added to their comfort, as did the nominal makeup.

The wonderful aspect about acting in Satyajit Ray’s cinema is that it doesn’t demand acting, it merely asks for the actor’s senses to remove ‘acting’ from his behaviour. Soumitra Chatterjee (who happened to garner Ray’s confidence the most) shared an analogy between a bird and an aeroplane to best describe the rift between an average and a great actor: “A bird flies without making a sound. He knows to screen his machine’s functioning. An aeroplane lets us know all the time that it is flying.” An average actor knows how to act and to mouth the dialogues. A better actor knows when not to act but to bury himself in quotidian silence.

In this celebration of ‘non-acting’, Ray more often than not always included small businesses—errands to keep the actor engaged in the breathing space between dialogues. This makes the stars actors and elevates newcomers. The camera becomes redundant to the actor, he can ignore it. This obliviousness of an intrusive machine also helped the child actors in Ray’s films the same way it helped an adult acting for the first time.

Neither too close, nor too far

In Seemabaddha, warning the zealous corporate about being too pushy, a senior patron advised Shyamalendu, the hero, to tread a line that was “neither too close, nor too far.” Not only did Ray’s cinema parade this philosophy, but I suspect there is a technical aspect to it as well. Ray’s introduction of ‘business’ moments often called for the hands of the actors. Inevitably, his camera had to be grounded at a distance, to hold the actors waist up; the oft-recurring camera position in Ray’s craft. How many times do we remember his camera rushing to the faces of the actors, to dig up the façade, to bare the wounds of a civilization? Like him, his robotic eyes captured the essence of humanity neither too close, nor too far, just enough to peep and let go.

No reward for non-acting

Many of Satyajit Ray’s films boast of memorable cameo roles. They maintain the poise of the script and the weight of the narrative, so crucial for his brand of filmmaking. They seamlessly blend into everything else.

Why have Ray’s actors been rewarded so few times by the Indian National Film Awards since 1968, when they were constituted? For the records, Uttam Kumar bagged one for Chiriyakhana in the very first year of the award, followed by Victor Banerjee for a supporting role in Ghare Baire in 1984. Mamata Shankar received a consolation special jury award for Agantuk in 1992, after Ray’s demise. Even though one may argue that most of the finer Ray films with superior acting happened before 1968, yet, the question remains: Why were none of the heroes of the Calcutta Trilogy or Ashani Sanket never recognized?

It is a misfortune that the actors in Ray’s cinema were almost never singled out by critics for their performances; a case of missing the woods for the trees. Busy with hagiographies that glorify Ray’s superlative craftsmanship and story-telling, we have sidelined the actors for far too long, believing that they were indeed inanimate puppets. Every artist thrives on a few deceptions. It is neither the artist’s shortcoming nor his fault.

This article was first published in Drisyathalam Satyajit Ray Centenary issue. We have made a few minor edits for clarity. For more information, check out FFSI Keralam’s Facebook page.

Photos courtesy Drisyathalam. They may not be reproduced.

Amitava Nag is an independent film critic based in Kolkata. He is the editor of the film magazine Silhouette. He has written five books on cinema so far. His most recent work is Murmurs: Silent steals with Soumitra Chatterjee. He writes poetry and short fiction in Bengali and English, and has quite a few collections in both genres and languages.