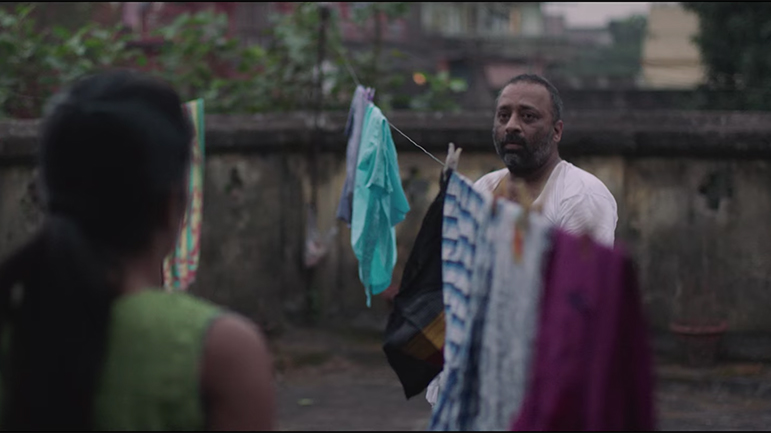 While it is generally agreed upon that much of Tamil cinema needs reimagining, I would like to posit that its structure and language are especially worse off. So much so that Tamil cinema appears stagnant. Late in 2017, I happened to watch an independent Tamil film, which gave me hope – hope to see a new culture of films that push the limits of cinema. Revelations, directed by Vijay Jayapal, was a movie with an impressive structure that deftly handled complicated thoughts and emotions.

Even if a director may be largely responsible for a film’s language, the part played by other technicians cannot be ignored. Every film demands a visual language of its own and there are no specific rules to be followed in order to achieve this. In Revelations, cinematography, editing and acting come together to form a unique visual language.

The three most important elements of cinematography—composition, camera movement, usage of light—do not stand by themselves in the film. They are based on a central theme that’s woven into the film. Every frame is filled with different geometric shapes. It was beautiful to observe the windows, doors, the corners of walls, the structure of buildings, and even electric wires dissecting certain frames; all of these contributing to the film’s visual structure. The crooked walls of the house in Kolkata, the balcony railings – these partition every frame they appear in, in vivid ways. Many scenes place characters behind grills of windows, or on the other side of support railings, as if to suggest they were imprisoned by their own emotions. The heritage and antiquity of Kolkata is spread over the entire film, adding more texture. Revelations stands apart from contemporary Tamil films by consistently making use of such techniques.

Usually with digital cinematography, the usage of artificial lights tends to make a place look unnatural on screen, risking the story’s credibility. This movie circumvented that by using natural light alongside additional prop lights. I would say the film succeeded in its lighting, except for the scene in which the journalist interviews various orchestra groups. However, this can still be rationalised as the scene was made to look like a documentary on purpose. It points to the possibility of the film’s willingness to explore light in different ways.

Not one movement of the camera was accidental. Be it stationary shots depicting the characters’ contemplations, or first-person shots to show what characters see, the camera angles were deliberate. There is a scene where Chetan and Lakshmi Priyaa kiss each other, oblivious to everything else. An agitated Chetan then leaves the room and walks down the stairs, the camera’s movements become shaky, as though in response to Chetan. This shift in camera movement in tune with the characters’ emotions added another layer to the film’s visual language.

In yet another scene, the camera gazes at the courtyard of the aforementioned house. The moldy woodwork, its shapes, its realistic texture underlined by light, and the arbitrary rays of artificial light enhance the aesthetic appeal of the frame. Now we see the wife enter the frame to open the front door, on hearing the doorbell. As she opens the door, a fresh exterior light falls on her face. She walks walk into the house with the guest, and the camera steadily tracks backwards. The background of the frame is filled with lines, squares, and woodwork of various shapes, with light coming in through the gaps, which enrich the shot. When a filmmaker carefully examines the structure of living spaces, his or her films begin to exhibit a unique aesthetic. It isn’t necessary that living spaces must always be aesthetic, or that every film must so carefully underline its aesthetic choices; but this movie makes very good use of the dilapidated house for its aesthetic undertones.

One of the reasons this film feels very delicate is the editing. Every shot and scene seems to be cut keeping in mind the unhurried pace of the film. Each scene gently flows into the next, without harsh cuts.

Let us examine a scene which served as an acting showcase: Chetan is in the kitchen, cooking, when he hears a sound coming from the bedroom. He runs to the bedroom and sees his sick mother on the floor, having fallen down from her bed (shock). He is unable to lift her and place her on the bed. He runs downstairs to ask the woman living there for help (anxiety). The camera appears as anxious as him. The woman opens the door and sees him (fright). He explains his situation to her, and they both go upstairs. The woman sees his mother lying on the floor (shock). They resolve this issue (thankful). Chetan asks her if he can hire a nurse in Kolkata (curious). She tells him she will enquire and makes a move to leave. In a moment, she turns around and asks him if she herself can take care of his mother. Chetan is initially surprised, later accepts her offer with some reluctance. The woman is glad. A single scene has within it numerous emotions, and the length of the scene justifies this. It wouldn’t be wrong to construct this scene differently – with twenty cuts for instance. But the aesthetics of the scene might be lost. The type of cinematic technique to be used and its placement are the most important artistic choices for a director to make.

Yet another reason Revelations must be celebrated for is its use of sound. Sound was recorded on location, and refined later in the studio. It is never easy to reconstruct the sound of the film’s world within closed walls. The live recording in Revelations helps us hear the sounds of everyday life, which we do not often come across in films. This gives us an enhanced aural experience. Even though the background score was used minimally, its use in specific instances helps elevate the emotions at play. The scene where Chetan and Lakshmi Priyaa travel on a bike over a bridge lit by neon lights, with a saxophone playing in the background, made me feel as if I was afloat!

The writing, screenplay, and the characterizations also contribute to this film immensely. All the characters in the film are those we encounter frequently in Tamil cinema: housewife, journalist husband, writer, independent woman, and so on. In spite of this, the director’s treatment succeeds in breaking the stereotypes associated with these characters. The characters’ traits and problems are revealed gradually. As the film draws to a close, we are left in no doubt about the inner turmoils of these characters. We are also convinced that the world they inhabit reflects their idiosyncrasies. We almost feel it was us living in Kolkata!

The director’s choice of camera angles lends a certain character to the film. Chetan is introduced to us as he roams the streets of Kolkata. The camera captures him in high-angle shots, making him appear small and bent. Later, as he overcomes his guilt, his stature improves and he is shown in low-angle shots, bigger and towering. I liked how toyed with our perceptions of characters through visuals.

There are moments in the film where his writing skills also come to the fore. We know Chetan is already frustrated with not being able to write, when he comes across a sculpture workshop. He sees the sculptors at work and he is reminded of his own love for writing. He touches the pen in his pocket. One art form reminds him of another, a love of art being the common thread. Such nuanced understanding of a character’s motivations is usually missing in Tamil films.

It made me happy to know that Revelations was screened at the Busan International Film Festival, followed by several other screenings worldwide. Tamil films may be making a space for themselves, globally. But at the same time, it’s sad that such films are not easily available to majority of the Tamil audience.

Nilavazhagan Subbiah was born in Tamilnadu, India. He currently lives and works in Germany as a research engineer. He is a self-taught filmmaker, aspiring to write and direct independent films. He has directed one short film and is working on producing his next. He studies and analyses cinema in an attempt to learn the medium.

Pradheep Balu lives in Chennai. Previously a mechanical engineer, he quit his job to pursue writing. His likes to write fiction. His other interests are cinema and sociology.