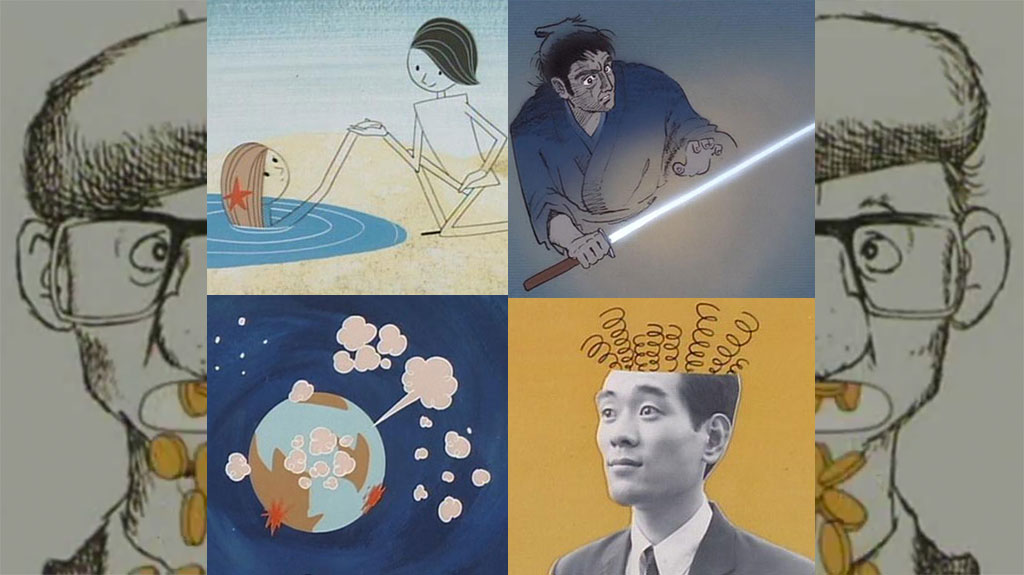 Tezuka Osamu is considered the father of manga, earning him accolades both inside and outside of Japan. The usual image of Tezuka is as a trailblazer who paved a career for himself at a time when there was no precedence, going so far as to stop his training in medicine to pursue his love for manga and animation. Though he is most well-known for his animation aimed at children, and his more mature body of manga work, Tezuka pushed the limits of his craft throughout his entire career, whether that be through technological advancements in animation, or the fresh narrative takes he brought to classic stories. 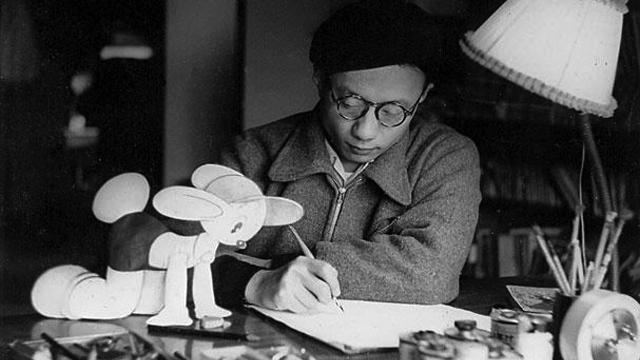 Born in 1928, Tezuka would live through three significant moments in Japanese history: the increasing militarization of the early Showa period, the occupation and Westernization of Japan in the postwar period, and the political upheaval of the student riots of the1960s. Humanity’s ability to utterly destroy itself and the planet are thus persistent aspects of Tezuka’s art practice, yet he is able to present these grim themes in visually captivating ways. While his political and philosophical worldview appear in his popular manga and anime, such as Tetsuwan Atomu [Astro Boy] and his highly acclaimed depiction of the life of Gautama Buddha in Buddha, Tezuka also explored similar themes in his less well-known experimental shorts.

The experimental shorts are comprised of thirteen animated films that Tezuka produced throughout his long career, often in tandem with his animation and manga output intended for wider commercial audiences. Though they range in run-time, the majority of the shorts are only a few minutes long, with a handful reaching past the thirty minute mark.

Aru Machikado no Monogatari [Tales of a Street Corner] from 1962 was the first experimental film Tezuka produced. It highlights both Tezuka’s personal anti-war beliefs and his keen ability to tell an emotional story using mundane elements of daily life. The short begins playfully, focusing on various elements of a street corner—mice, a streetlamp, a moth—but shifts narrative focus onto militarization and warfare. While the short ends with a possibility for regeneration after destruction, the short points to the cost of warfare and the ways in which destruction can reach the smallest, most local of spaces.

Mermaid (1964) is a similarly charged short, exploring the importance of imagination and the toll that living in a society that attempts to extinguish individual imagination has on individuals. Both Mermaid and Tales of a Street Corner explore the detrimental impact of controlled societies on the individual; both stories are told through beautifully vibrant animation, as if to highlight what is truly at stake. A similar theme appears in Muramasa (1987), a short that depicts the legend of a cursed sword—to keep the blade sharp, the samurai who wields it cuts at straw figures to test the sharpness of the blade, only for the figures to transform into humans.

Although Tezuka’s interest in philosophical themes permeates many of the shorts, some shorts are also simply stylistic experiments intended to push the bounds of animation. The shorts differ widely from each other in narrative and in style. Most notably, these shorts deviate from the rounded archetypal character design that Tezuka is famous for. Instead, the shorts shift between photorealism, vivid geometric shapes, soft watercolor effects, and scribbled line art to tell their unique stories.

One of the most popular and well-known shorts, Jumping (1984), depicts the world from the eyes of a child jumping down their street. As their jumps become increasingly higher and farther, they traverse forests, cities, and even an industrial space, encountering people and animals along the way. The short won both The Grand Prize and UNESCO Award at the 6th Zagreb International Animation Festival in 1984, and The Silver Ear Award at the 1985 Valladolid International Film Festival.

Tezuka’s final short, Self-Portrait (1988) is only thirteen seconds long. It depicts his face as a slot machine, rolling through multiple combinations of faces before revealing his own classic beret-wearing portrait, mouth agape with gold coins spilling out. Both Jumping and Self-Portrait deviate from the hallmark Tezuka style, but are enjoyable technical snippets of animation that explore different art styles.

One of the most visually arresting of Tezuka’s shorts is Memory (1964), which uses a blend of photography and animation to explore the fallibility and idealization of memory. In true Tezuka fashion, the story begins in a light hearted manner, before shifting register and expanding on the theme of human memory, the destructive tendency of human beings, all of it leading to Earth eventually becoming a memory of the universe.

Unfortunately, not all of the experimental shorts Tezuka began would be completed before his death in 1989. There are a number of other shorts outside of the thirteen completed films that were never finished and are difficult to find. Likewise, many of the shorts are in Japanese and have not been translated into other languages. The shorts that rely on a voiceover or dialogue, such as Memory, may be difficult for non-Japanese speakers to follow. However, Tezuka’s fascinating array of visual styles within the thirteen shorts makes viewing them a worthwhile experience, even with a possible language barrier. These shorts are also not the only arena in which Tezuka pushed the bounds of genre. His body of work includes other animated risks such as Cleopatra (1970), advertised by the distributor as an erotic animated film for adults. While Tezuka is rightly lauded for his classics aimed at children, particularly outside of Japan, his long career as an animator produced hundreds of other less-known films that further solidify his place in film history.

Julia Shiota is a writer and editor born in Japan and currently living in the Midwest. Her work has appeared in Slate, Electric Literature, and Catapult. You can find her on Twitter or at her website.