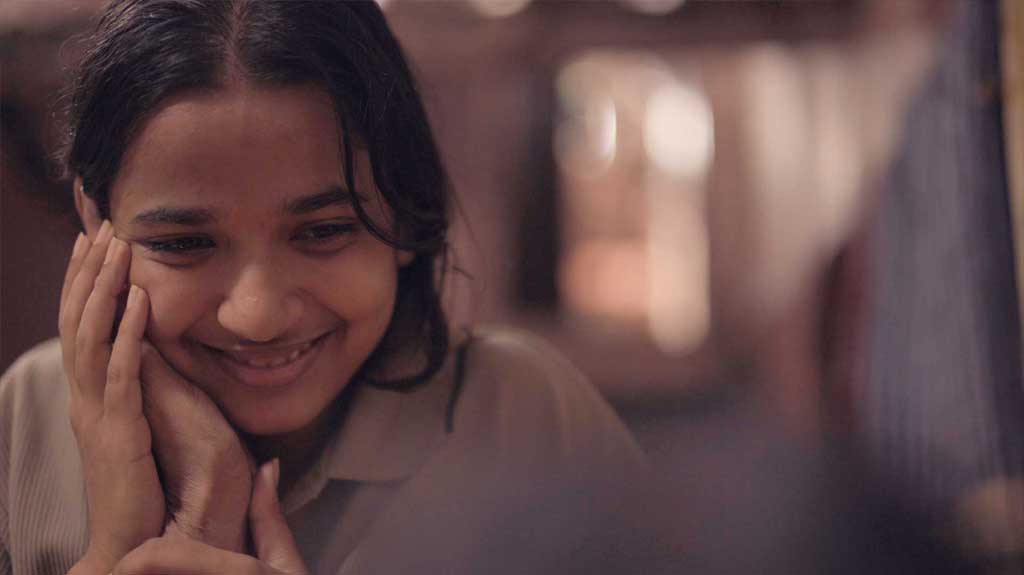 Kalyani’s vulnerability and courage caught my attention as I watched Run Kalyani, the award-winning movie directed by Geetha J. The film follows the regular life of Kalyani, a young working class woman. She lives in a rented house in an agraharam [a street historically marked for brahmin castes in India], along with her ailing aunt. She is employed as a cook in the homes of the privileged, and through her eyes, we see many truths unfold in these seemingly dignified domestic spaces. A tender love story evolves in the midst of all this, with Kalyani being the messenger between the lovers, unable to be with each other because of social constructs.

Garggi Ananthan, who won the Best Actor (Female) at the New York Indian Film Festival 2020, for her performance as the protagonist in Run Kalyani, carried off her role with considerable ease. Talking about her process, the student of School of Drama (Thrissur, Kerala) says she imagined a backstory for her character. “Usually before a play, we get 20 days of rehearsal. And as you keep doing the rehearsals, you decide what is needed and not needed. You are also discussing the character with so many people. All these 20 days, the character is being developed. But in the case of Run Kalyani, the shooting began a few days after the casting itself. I didn’t have much time to prepare.”

Camaraderie and comfort on the sets of Run Kalyani kept her going, and helped her remain focused on her craft. “I cannot say one particular thing influenced me. What I see, what I read, all of it helps me open up my mind. It is a myth that theatre actors cannot fit into the medium of cinema. The medium is different, definitely. For instance, one advantage in films is that you can do a scene until you get it right. Also, I had a great rapport with the technical crew. I was very comfortable with the cinematographer (Madhu Neelakandan) and director! The director narrated the character to me in very simple terms. I did not have to work hard to dissect it. I didn’t approach it that way. It was a smooth portrayal, told to me in an easy and light manner.” Her drama school training has helped her in getting the rhythm of working with different directors. “Since Geetha chechi is also the scriptwriter of the film, I got to understand Kalyani better.”

Being comfortable in a professional space is a luxury for many women, and more so in the film industry, where the number of men constantly outnumber the number of women. It is mostly up to the film crew to make the female team members feel at ease. This can only come about if the entire set, men and women, pay attention to it and be sensitive to it. We hear stories of how actresses felt at ease when the film they were part of had an all-woman crew, or how actresses were not given a private enough space for their personal care and hygiene. We must not dismiss these observations, for they tell us how normalized inconveniences are. If an actress recounts a comfortable experience with such excitement and gratitude, what does it reveal about our industry? We have been witnessing many discourses a round gender in the last few years, including the #metoo movement in the Indian film industry. We are also seeing a growing movement in Malayalam cinema, with (female) artistes and thinkers speaking up about the need for more women technicians and content creators. The Women in Cinema Collective, started in 2017 by women in the Malayalam film industry, aims to work towards “equal spaces and equal opportunities for women in cinema.”

Our very idea of a ‘female-centric movie’ is often restrictive. In popular cinema’s framework, the protagonist of such a film has to either battle a series of problems, or she must be the victim of some kind of abuse. Humour is sorely missed in these films! We don’t get to see these women laughing out loud, enjoying themselves, dancing with abandon, exploring what life has to offer. A few movies have begun to come out of this mould, but for the most part, we are still caught up in clichés. While male chauvinistic movies are problematic, this is problematic as well. “That could be because even the so-called female-centric narratives are written by men,” Garggi observes. “These women are created by men and that affects the way the film is made. Everything is told from a male point of view. You see interesting characters taking shape when female writers come to the fore.”

Director Leena Yadav mentioned something similar during a panel discussion at the Singapore South Asian International Film Festival 2017. “I am judged if my films have weak female characters.”

The career of a female artiste is much shorter than her male counterpart. Older men continue to be paired with very young women. Garggi says she isn’t sure of how much she can endure. “Even during casting calls, people are on the lookout for fresh female talents. The heroes are constant, the heroines keep changing. Can I sustain? I do not know how this industry works. I do not have the experience.”

Looking back at Malayalam cinema, we can find some patterns in the way women characters are treated, especially if she happens to be a woman with varied interests. She might be an interesting person, but she is made out to be unfit for happiness in the domestic sphere. Take the most popular Malayalam film of the 90s, Manichithrathazhu. It is about a woman with an active imagination and love for stories; she identifies a little too much with the tragic life of an exquisite dancer from the past. She even breaks into dance in the wee hours of the night, when everyone around her sleeps. A narrative that could have looked at this as a woman discovering her love for the arts, instead focuses on taming her free spirit and creative spark. Are we being told that a woman escaping into a world of her making is a threat?

A heroine who enjoys the surreal space of imagination becomes a rebellion in itself. In Run Kalyani, Kalyani finds refuge in her imagination, whenever she finds time. Her favourite moments are in her bedroom, after a long day of work. An imaginary writer friend awaits her. He could be anyone; the film doesn’t tell us. He tells her stories and she falls asleep. “For me, he is Kalyani. Inside the room, another side of her gets expressed. Her imagination finds wings. The moment she climbs down the stairs, she is in another world. People are free to interpret it any way they want. It is left open. In one article, the writer had interpreted this character as Kalyani’s brother.”

Kalyani also questions our assumptions about vulnerability and strength. Why should a soft woman be considered weak? Why do we assign masculinity to strength? “Why do we associate anger or loudness with strength?” asks Garggi. “According to me, Kalyani is a woman who knows her worth. She knows what to do and how to do those things. She is suffering, but not worried. In fact when I look around, I find that people who become rich lead a sadder life than those who don’t have much. Kalyani is used to her life.”

Bold could mean anything: agency, choice, resilience, endurance, free will, the ability to dream… When we place this word in one particular context, we are actually doing it a disservice. We are also ignoring the numerous women who quietly go about their lives, making choices that are more interesting than we could ever hope to be. “When something comes up, Kalyani has to make a choice. At that moment, she clearly knows what she wants to do. In life, it takes a lot of guts to make choices. And women have been trained to live a life of limited options. Most of us are brought up like that. To make choices after being raised in such a milieu, we need a lot of guts,” Garggi concludes.

In our hurry to stick to a template, we make art devoid of nuance. They lack subtlety. Run Kalyani does not fall into that trap. It encourages us to think about unassuming people and their interesting stories we may be ignoring. Kalyani is brave and resilient. How can such a person not deserve a thrilling crescendo? Her run at the very end does not come as a surprise to us. By then, we are rooting for her.

Parshathy J. Nath is a theatre practitioner and freelance journalist based in Thrissur, Kerala. She has worked in almost 17 productions and 2 films. She trained at Adishakti, Natanakairali, and Ninasam. Most recently, she acted as a female lead in the Indo-Australian short film A Bride of Aravan, co-directed by Lesley Branagan and Yatra Srinivasan. She worked as a Senior Reporter/Subeditor in The Hindu for six years. She completed her Masters in Magazine Journalism at Cardiff University, Wales, specializing in Kerala’s film-star system.