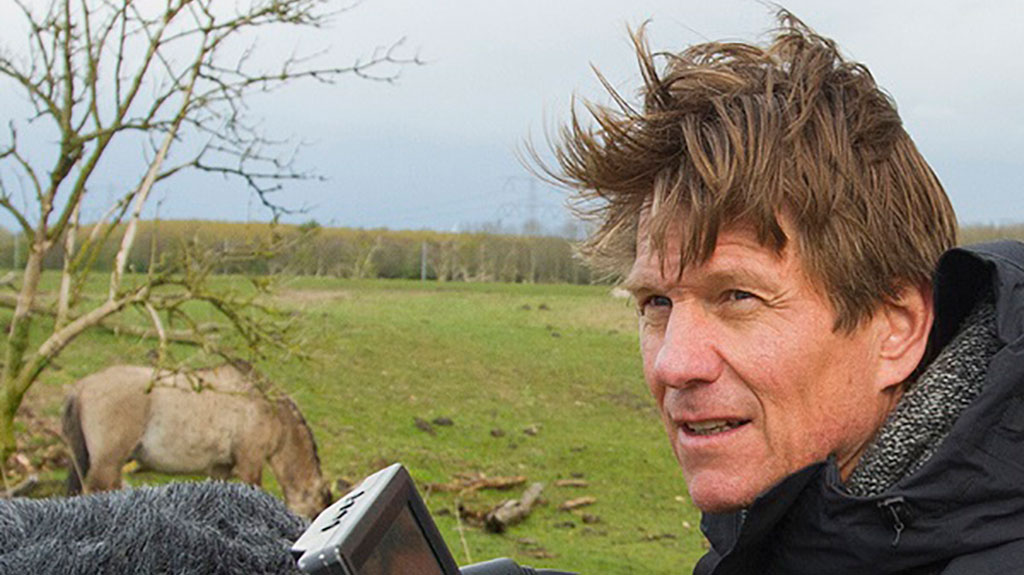 Mark Verkerk was born a Dutchman in Nairobi in Kenya. He studied at the London International Film School. In 1980, his career as a filmmaker started in Australia. The documentary Buddha’s Lost Children (2006) was his first film that was shown in the cinema. The documentary was also nominated as a Dutch entry for the Oscar in 2007. Verkerk’s most successful documentary was the nature film De Nieuwe Wildernis (2013), with more than seven hundred thousand cinema visitors. In 2014, Verkerk won a Rembrandt Award, and the Golden Calf for Best Popular Film at the Netherlands Film Festival for his nature film. We caught up with him via email to know more about his latest film De Wilde Stad [The Wild City], his other films, and inspirations.

Tell us about when you decided you wanted to make films.

I had two big passions in my life on leaving school: one was biology/environmental sciences and the other was photography. When I realised that I didn’t want to work as a pure research scientist, I began looking for ways to combine the two interests, and discovered that documentary filmmaking did that perfectly. Over the years, I have worked in many different areas of television and film, but documentaries have always been my main interest—especially those focussed on nature, and the relationship between humans and nature.

What/who would you call your inspiration and influence as a filmmaker?

Anybody making wildlife films will, of course, point to David Attenborough. In many ways he paved the way for all of us. But from the Netherlands, Bert Haanstra was an early inspiration. Though he didn’t make classic wildlife films, he made a number of hugely popular films which compared and contrasted the behaviour of animals and humans, often with great humour. Another big source of inspiration was the work of Dutch cameraman and filmmaker Hugo van Lawick. His majestic wildlife films, shot for the most part in Tanzania—where he lived for a good deal of his working life—were the first to focus on telling the stories of specific animals, creating rare insights into the lives and minds of discrete individuals. Before this time, animals were depicted as having generic behaviours dictated purely by instinct.

We are always interested in film cultures from around the world. What do you think is unique about the film culture (both making and watching) in The Netherlands, or even your city?

The Netherlands has a rich history in documentary films, thanks to filmmakers like Haanstra and van Lawick, and many more, who have contributed to a great number of innovations in the art of documentary filmmaking. What bothers me now is that ambitious projects are getting harder and harder to realise, as funding (for the arts in general) gets more difficult.

Any filmmaker(s) from your country whose work you love or get inspired by?

There are many. When I started, it was the two mentioned above, but also the films of pioneers like Joris Ivens. Though his films often created a lot of controversy (because of their political nature), his approach to crafting a documentary using the same techniques, strategies and sensibilities one would use to make a scripted dramatic feature always impressed me.

What was the inspiration for you to make The Wild City?

The Wild City is the third in a series of cinema films looking at nature in the Netherlands. The first two were filmed in more traditional remote natural settings. For the third film, I wanted to include the human environment. Holland is after all one of the most densely populated areas in Western Europe, and so it was impossible to avoid looking for nature in a city setting. Also, most people around the world now live in cities, and biologists have begun to recognise that urban areas are also important ecosystems, in the same way as traditional grasslands, forests or coasts. So internationally, appreciating the value of urban nature is just as relevant as it is in the Netherlands. To marvel and appreciate nature, you don’t have to leave the city and travel to some remote, exotic location; you can find it on the street corner, in fact, everywhere you look. We need to begin to realise that humans and nature are one, there is no separation. And that means what’s good for nature is also good for us.

What quality were you looking for in the artist who voiced for the cat and why did you pick Martijn Fischer for it?

The decision to include a cat as the guide and narrator for the film was not an easy one, but with this film, I wanted to reach a broader audience than you would normally reach with a classic wildlife film. A cat is in many ways the perfect intermediary between human and animal worlds, knowing how to move seamlessly between the two. In this way I felt the cat could guide us through the city, introducing us to different animals that lived there, and do this in a playful manner without having to go into complex ecological explanations. Martijn Fischer—a well known actor—was able to find that delicate balance between humour and entertainment on the one hand and factual information on the other hand, that an audience needs to enter the worlds of the animals being featured.

What are some of the unique challenges of making animals act? Do the animals end up changing your story in some way, from what you initially conceived?

Of course, that’s the fun of it! I began with the idea of using a local city cat from a cafe or shop, but after having met a few, I realised that they weren’t going to be happy to roam about the city in the way that was needed for the film. It became obvious that a professional was required. That was how we found Sabine van der Helm and one of her charges, Abatutu. He had, from young, been exposed to the noise and bustle of the city, and had done theater work, commercials, and some short scenes in films, but never anything quite as demanding as what was required here. I think approaching his role as a wildlife filmmaker helped a lot. The most important thing for me was that he show at all times normal, relaxed behaviour. The approach was to introduce him to a particular setting and location and then follow his natural reactions and expressions. In that way, he often shaped the outcome of the scene. Along with his zen-like calm, which he maintained in even the most distracting circumstances (celebrations like the King’s birthday or Pride Amsterdam), his great talent is his natural curiosity, which keeps him present and reacting to the situation he is in. This is what makes him a wonderful actor. A regular house cat would never have been able to do what he did.

Tell us about a European film, not from your home country, that you love. What makes it special for you?

Microcosmos by Claude Nuridsany, Marie Pérennou. It showed for the first time how the unknown microworld of insects can be just as dramatic and action-packed as the more familiar macroworld we generally know.

How did you hone your craft before making your debut film?

I began working forty years ago, when using actual film was still the norm. This was a very different time to nowadays—the whole process was very expensive and you needed to get together a large group of people with specialised skills in order to make a film. I felt I needed to understand each of the individual disciplines, so I worked both as film cameraman and film editor before taking my first steps in directing. Now with digital technology, access to filmmaking has become technically and financially very much easier, which is wonderful. But I’m glad I worked my way up through the technical ranks before focussing more on writing and directing. The old apprenticeship method of learning was very valuable. It is now more or less a thing of the past.

Tell us about your writing process. How many drafts of the screenplay did you write? Were there major differences between successive drafts?

A film like this requires a lot of research in order to decide on which specific animals and birds to focus on, and then in which locations to film them the most effectively. I don’t script in the way you would for a scripted drama. A detailed film plan is essential in order to get the required balance of dramatic development for a film like this—which was conceived more as a kaleidoscope of scenes—to underpin the energy and diversity of a city like Amsterdam. Because a film like this is filmed over two years, you are constantly adapting the film plan during the shooting period, to account for the material captured. You could say this is more like a process of controlled improvisation than rigid planning and scripting. As in all forms of documentary, it is vital to stay alert, to observe and capture the unexpected.

What are you reading and watching currently? We are curious about your fiction and non-fiction reading, your movie list and your television programming. Are there any permanent favourites?

Currently not reading much fiction as the non-fiction list has grown so long. This includes Feral by George Monbiot and Beyond Words: What Animals Think and Feel by Carl Safina.

What are your memories of the first film in a foreign language you ever watched?

From memory, the first foreign language film I saw was Walt Disney’s Bambi. At that time my English was poor, but the imagery told the story. In retrospect, this was a very good first lesson in filmmaking.

Do you have interesting projects in the pipeline? Anything we should watch out for in the near future?

I’m currently working on a wildlife film for the cinema set in the harbour area of Rotterdam, the largest industrialised area of Western Europe. Maybe not a typical setting for wildlife but surprisingly there is more diversity there than in the average national park in the Netherlands. In the last few years, the land, air, and water quality has dramatically improved, and due to automatisation, there are now much fewer people in the harbour. All of this has resulted in a big increase in the amount of the wildlife present. Many species are in fact being drawn there from the surrounding agricultural areas, which are by comparison much poorer as regards to the food and habitat available. I think many people will find this quite surprising. Nature is very adaptable and if we give her the space, she’ll take it and rebound.

Special thanks to Shirlene Noordin and Deepika Shetty for making this interview happen.