Shadows, the debut film of Greek-American writer and director John Cassavetes is often considered one of the pioneering films of American independent cinema. Built around improvisation, with an elliptical narrative and an off-beat, contemporary soundtrack, it was strikingly different to the studio films of the day. Other films released that year included Pillow Talk—a film about relationships, and the lack of sex represents a Hollywood still under the restrictions of the Hays Code. Therefore Cassavetes’s film, that featured three black and mixed-race actors as the protagonists, and tackled racism and sexuality in such a frank way, feels timeless and relevant in a way that Pillow Talk doesn’t. 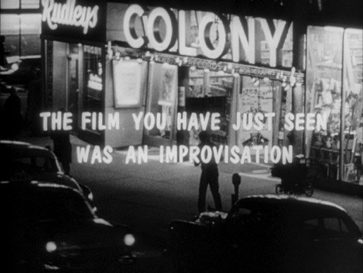 It’s perhaps slightly unfair to compare studio films that were still in the grasp of the Hays Code and entirely dependent on maintaining a star’s persona—Day’s virginity, Hudson’s charm—to a self-financed independent production consisting of unknown actors from the New York scene. We can conclude that while both films were made at the same time, Shadows is able to maintain some elements of realism with regards to society’s changing views on sex and race, whereas Pillow Talk was constrained by the artificiality of the production system.

Shadows takes place in an unidentified neighbourhood of New York City, where struggling jazz musicians mix with the literary bourgeoise at parties, and three siblings are trying to navigate the world in their own different ways. Hugh (Hugh Hurd) is the eldest, a struggling jazz singer who has never quite reached the level of success he feels he deserves. Ben (Ben Carruthers) spends his time trying to pick up girls, while ignoring his musical skills. Lelia (Lelia Goldoni) is their younger, lighter-skinned sister who is exploring romance and her own future, with mixed results.

Unlike studio rom-coms where sex could only be hinted at, and in no way would a female character be able to have three separate relationships during the course of a film, Shadows adopts a welcome frankness about Lelia’s desire and sexuality. After dating David, an older writer who patronises her writing attempts and her lack of ambitions, she meets Tony at a dry literary party and starts seeing him. In contrast to David’s attempted lessons in writing, Tony is presented as an exciting and dashing character, who literally runs away with her. This veneer of charm quickly wears thin once Lelia loses her virginity to him, as she lies with her back to him and stares off into the distance. The camera is entirely centred around her experience and stays motionless as she mournfully mutters that she “didn’t know it could be that awful.” Tony replies with meaningless platitudes that fall on deaf ears. Tony is further revealed to be the closest that Shadows has to an antagonist, when he visits Lelia at the siblings’ flat in an attempt to win her back, only to be confronted by Hugh. Upon realising Lelia’s racial identity, he attempts a feeble excuse for his behaviour, which Hugh sees through immediately. He chases Tony away from the flat.

Lelia is never punished for this choice. Hugh, incensed on his sister’s behalf, conceals the confrontation from Ben, the sibling prone to outbursts and acts of violence. Hugh simply says that it was “just a problem with racists, nothing you’d be interested in.” By hiding the act that lead to Tony’s appearance in the apartment, he spares Lelia the humiliation of having to further explain her relationship with Tony. When the film cuts to the next morning, we see Lelia smoking morosely in bed. It is her brothers, teasing her and rough-housing as if they were still teenagers, who can distract her from the pain and humiliation she has endured.

Shadows is relatable and relevant to today’s society in the way its women are presented on screen. Lelia is the only named female character with significant dialogue, while the rest simply appear as objects of her brothers’ charms. From the beginning of the film, the sexualisation of women is everywhere—through the “dolly birds” of Hugh’s nightclub performance, to Lelia’s adventures in romance by unsuitable men. Shadows feels comfortable in looking at the male gaze and criticising it—to an extent.

In a scene reminiscent of many conversations that young women everywhere have had with members of their families or close friends, Lelia is told by Hugh to get a cab home as “a girl can’t walk down any city street at night.” With the invincibility of youth, she replies, “nothing is going to happen to me,” and smiles sweetly, as her elder brother looks on worriedly. Lelia’s perspective is that she has every right to walk the streets of New York, as much as any other person who lives in the city.

As Lelia walks home, the vibrancy of New York nightlife highlight her beauty: one low camera angle juxtaposes her against a wall of lights, emphasising the lines of her face amongst the glitz of the lights. Throughout this walk home, the sexualisation of women is shown as a constant presence in the world of 1950s America—a time period that modern audiences would associate with conservative attitudes and behaviour. Lelia is surrounded by sexualised pictures and depictions of women—standing outside a theatre, she looks up a at wall of pictures of women in suggestive positions, and it is here that she is approached and harassed by a man who attempts to grab her and initiate an unwelcome conversation. Neon signs scream out ‘Girls, Girls, Girls!’ against the night sky, and this concept of woman as commodity, something to be bought, owned, sold, and taken at will, is something that Lelia’s character fights against consistently throughout the film. Not only is this attitude something that many studio films of the same period ignore, it is something that women continue to deal with today, especially when the female character across mainstream cinema is often a token in a cast of men. While Shadows does risk falling into that dynamic due to its cast, it is refreshing to see such a feisty and independent female character fighting against sexualisation and street harassment, issues that continue to exist to this day.

The final, and perhaps most universal, element of Shadows that continues to resonate with audiences is the sense of hopelessness and uncertainty that exists in the characters’ futures. In post-war America, the optimism of the baby boomer generation appears to have passed by the main characters of Shadows. There is a pervading sense of dissatisfaction with the direction their lives are taking. They want to make changes but do not possess the means to make a significant difference. Hugh, the primary breadwinner of the family, is the only one with ambitions, and therefore believes that he should be in a better position with regards to his music career than he currently is. During a dress rehearsal of a performance, he responds with disgust when asked to introduce the chorus girls, believing that such behaviour is beneath a musician of his talent who is playing at a “third rate nightclub.” Despite the arguments of Rupert, his manager, Hugh is dismissed by the owner, who states that he can be easily replaced by people eager to take his place. If nothing else in this film resonates with today’s generations, these unsatisfactory, meaningless, and sought after jobs that are reluctant to pay will definitely strike a chord. In a world where we are constantly told that we should be grateful for every opportunity, to take internships even if they’re unpaid because unless we struggle and starve, we are clearly not ambitious enough, this scene in Shadows is surely reminiscent of circumstances that many people have had to endure.

As Hugh and Rupert deliberate on the train platform about going to Chicago, where they might be able to get some more gigs, we see the spark of a pessimistic optimism that is a key quality of the millennial, and their specific brand of internet humour.

While there are obvious differences with regards to socio-economic situations and society in general, this sense of “fuck it, we haven’t got long, let’s just do what we want” is apparent both in the image above, and Hugh’s final realisation of his career. Between moving out of the city to the unknown or staying in New York and working in the same places, Hugh decides to stay: if they are “going to be failures, let’s down it our own city!” This acceptance that dreams might not always be fulfilled in a society dominated by race, class and gender dynamics is timeless. There is a profound sense of liberation in embracing failure.

With its nods to the Nouvelle Vague movement in France, the location filming, and the jazzy soundtrack, Shadows feels significantly different to its contemporaries, movies that were dominated by the likes of Doris Day or Burt Lancaster. It has a naturalistic humour that manages to cut through the decades and resonate with audiences today.