In Chennai, we wait for the last week of July every year, to catch screenings of local and international films that revolve around the lives of the LGBTQ+ community. The Chennai International Queer Film Festival (CIQFF) this year was organized and conducted by Orinam, Goethe-Institut, Nirangal, Chennai Queer Café (CQC), Saathii and East-West Center for Counselling and Training this year.

In a country where homosexuality is criminalized (at the time this film festival was conducted, and at the time of writing this article)*, and where a large population is still homophobic, mainstream Indian movies hardly do justice to the Indian LGBTQ+ community. Lives of the queer people still remain a mystery. The heteronormative crowd disregards it as taboo, and the media’s representation (or lack thereof) of the community only exacerbates the problem. CIQFF helps break this wall of ignorance and hostility. This festival has consistently proven itself to be aware of its position, to entertain as well as to sensitize. It is a place for the LGBTQ+ community to watch movies that they can finally relate to, and for the rest of the public to learn and, understand the different shades of gender and sexuality.

This is the sixth year of CIQFF, and nearly 32 movies from 17 countries were screened at the festival. The creators of these films were mostly local indigenous artists (who have not received enough attention) and media students. The problems faced by the grassroot level activists, and the reality that often goes unnoticed from the public eye, inform these films.

Artists across the world, with diverse sexualities, are working towards the evolution of sensuality in visual language. The heterosexual visual language predominantly uses the face, eyes, lips, ears, chest, fingers, waist and inner thighs to portray sensuality in films; while films made on (and by) diverse sexualities rightly break this rigidity in visual language. Sensuality is no longer built upon the objectification of the female body. The films screened at CIQFF 2018 were in tune with this universal film trend.

Something About Alex, a short film from Netherlands, is about a teenage girl who feels she is actually a boy. The director casts a boy in this role, and just when the character begins to understand he is being separated from social and familial structures, the ‘he’ is shifted to a ‘she’, using a jump-cut. Also, the state of the parents of this teenager, who experiences gender dysphoria, forms a crucial subtext of the film. With the help of refined cinematic techniques, this film explores the difference between one’s appearance and behaviour. Along with the adolescent’s search for his/her own identity, the film also looks at the main character’s asexuality. In one scene, a male friend tries to kiss the main character, who immediately runs away. There aren’t too many films that talk about Asexuality.

An American short film titled The Taste of Love attempts to associate a woman’s sexual moments with the various tastes a normal human tongue can discern. Without falling into the trap of using hunger as a metaphor for sex, the woman’s journey in search of unusual tastes forms the basis of this film. The screen was filled with the lush colours of fruits, never letting us forget that we are watching a film about a woman’s sexuality. The Taste of Love was definitely a sensuous and surreal short film.

Goethe Institut along with Berlinale, brought to CIQFF a set of films which competed at Berlin International Film Festival. One of the films in competition for the Teddy Award in 2017 (official queer award at the BIFF), Paths [Ein Weg, German], focussed on the problems a gay couple face, after years together. They have a son, who is growing up all too quickly, and they have to come to terms with their own dissatisfaction. The visual language of this film did not rely on the couple’s faces or genitalia. When two bodies get close, don’t the eyes roam all over, noticing the small soft hair on the neck, or the thickness of the hand muscles, or the goosebumps on the glowing skin? Paths visualized the couple’s intimacy thus.

We can see such scenes often in European films. Instead of focusing only on the faces and genitalia, European artists—especially artists with diverse sexuality—are constantly trying to find better, more attractive, ways of showing a human body. They are also also successful at it.

The Comet is a Swedish short film which was also in competition at Berlinale 2017. It was outspoken in its criticism of the current immigrant crises, and it went on to delineate sexual oppression, showing the effect it has when compounded with racism. The film made use of realism to tell its story, and the camera was mostly stationary. This technique, though an old one, was effective in communicating the tragedy of what was unfolding, leaving the audience greatly moved.

Many other notable films were screened at CIQFF 2018. Some of these are May, Gender Troubles: The Butches (one of the very few representations of butches in media), Rebellious Essence, Ablution, Older Than What, My Gay Sister (winner of the Teddy Award at Berlinale 2017), Sunken Plum, The Cycle. Along with these international films, eight Tamil and Indian feature films, shorts and documentaries were also screened. These Indian films are not as sophisticated or well-made. This may be partly due to the lack of funding, or the absence of a developed cinematic language. But surely these cannot be the only reasons.

In India, there has recently been an upsurge of films with pro LGBTQ+ content. Sadly, the social mindset of the country is not evolving simultaneously. Young media students and film producers belonging to the upper class assume that LGBTQ+ ideologies (restricted to Gay and Lesbian realities) would be new to the Indian film market. Their treatment of the content reflects this attitude: just like how the first Indian silent film was ‘inspired’ by a French silent film, or just like the Tamil actor Jaishankar who popularised cowboy films, even if they were far removed from the Tamil cultural landscape, or just like the film Tik Tik Tik (2018) which unsuccessfully tried to transpose a version of American sci-fi onto a Tamil film sensibility. They seem to be doing this for the sake of being the first to represent LGBTQ+ community in Indian cinema. 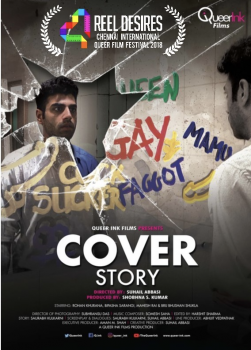 Most of the Indian/Tamil films that were screened at CIQFF 2018 were interested in disseminating information about LGBTQ+ communities, often in pedantic ways. Everyday lives did not find a place in these narratives. These films also resort to tired, heteronormative ideas of what is sensuous—lingering on the characters’ faces, hips, chests, even when depicting homosexual relationships. Films like Cover Story, Anthadhi, Natural, Amar, Prem are examples of this approach. Unlike European or Latin American cinema, which have their own visual language for LGBTQ+ ideas, Indian cinema has not yet created a language of its own. Indian films incorporate the queer story as though they were ticking off an item on a checklist, and enforce the same visual components that they have used for ages in mundane heterosexual stories, thereby mangling the LGBTQ+ lives they depict.

The only Indian film which was true to itself and its subjects was the Malayalam short film May. It did not depict a homosexual relationship in the obvious way most Indian films try to do. A couple (friends?) who cherished their relationship long ago, get to meet, and the consequences of their decisions in the past and the present form the crux of this movie. In spite of a limited budget and employing just three actors (along with a pet), the film portrayed a homosexual (homoerotic) relationship with much dignity. The audience seemed to appreciate this too.

Why are local films screened year after year at CIQFF, in spite of their obvious mediocrity? It could serve as encouragement for artists trying to experiment with form and content in a country that doesn’t want them to. Even while the difference in quality is quite glaring, it is in some way heartening to be aware of these films, it creates hope for the future. But this isn’t to say they are beyond criticism simply because they exist. We must demand they get better, we must keep looking for representation that doesn’t feel alien.

Several other events were organized alongside the film screenings: the festival began with a poetry reading by Ms Kalki Subramaniam. On the second day, a panel discussion on Intersections and Solidarities took place, in which activists from various grassroot level organizations participated. The final day witnessed a biographical theatre performance by author and activist A. Revathi, titled Vellai Mozhi, directed by A. Mangai.

The panel discussion touched upon various issues that plague the LGBTQ+ community in India, especially groups of people at the intersection of different types of oppression (caste, sexuality, gender). One audience member, of a conservative inclination, questioned the panel: “Why should everything be tainted with politics? Why mix Dalit politics with sexuality?” But this is exactly why the Indian society needs more of these discussions. It is to the credit of the panel that they received such questions with good humour and insight, moving past the obvious discomfort. They spoke of the social structure, and the privilege that is available to only few pockets, and how the lives of ordinary people are fraught with complex problems.

The lineup of events at CIQFF 2018 left me with a sense of fulfillment. Many shows ran to packed halls, and the extra seating arrangements didn’t suffice sometimes. The enthusiastic crowd sat on the floor, keen to not miss any of the films. The collaboration between Goethe Institut and Berlinale was successful too—one hopes it carries on next year. It gave us a chance to watch cinema from different countries, and made the audience aware of opportunities that exist. Keeping in mind how such an event is not part of the mainstream discourse in India, I certainly believe that CIQFF is one of the best spaces to discuss uncompromisingly and confidently the LGBTQ+ community in India.

*Section 377 of the Indian Penal Code, which criminalized homosexuality (what it referred to as “unnatural”), has since been read down, to exclude consenting relationships among adults; in a landmark judgement on September 6, 2018. Read more about it here.

Pradheep Balu lives in Chennai. Previously a mechanical engineer, he quit his job to pursue writing. He likes to write fiction. His other interests are cinema and sociology.

Shivapriya Ganapathy volunteers with Orinam and Nirangal, and actively participates in LGBTQIA+ events in Chennai. She has a Master’s degree in English literature and is currently working on “Lesbian Feminism and Language” for her doctoral thesis. She enjoys experimenting with poetry; her poems have appeared in various online magazines and three international anthologies.