Dispatches from Anusha, in Pittsburgh

I watched the Marathi film Sairat, a stunning love story that also manages to stun you into silence, with its takedown of the caste system. I spoke to my Marathi friend about this film, and she told me something fascinating. She didn’t watch the last thirty minutes, she said.

“I just read the plot on Wikipedia, so I know how it ends.”

It hurt a little, I’ll admit.

Dispatches from Ramchander, in Singapore

While considering visuals for the trailer to the fifth issue of The World of Apu, I came upon the Mulan mountain fight scene. The visual of the army of the Huns gliding across the snow in droves, to attack a small group of Chinese soldiers, caught my interest. I made a mental note to watch the film, and soon forgot about it. 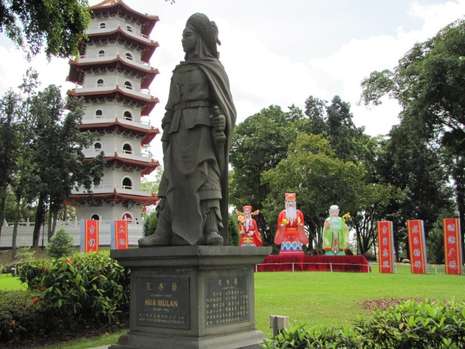 Later, while strolling through the Chinese Garden in Singapore, a friend pointed excitedly at one of the statues. “Hey that’s Mulan! She’s an awesome warrior, who had to dress up as a man to join the army.” She went on to tell me about her all-girls high school, where they asked the students to pick a quote for a banner, which would be be put up prominently in the school courtyard. The students, all of them in their teens, voted for this line that the emperor tells Mulan after she defeats the enemies. I simply had to get a picture! 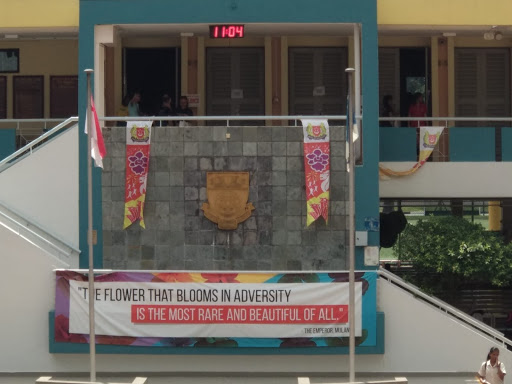 So what does this issue have?

Here’s a trailer (please scroll down if you’ve already watched it):

Julia Shiota writes about the Studio Ghibli films, how they brought Japan back to her; with art work by Clinton Tham.

Manishankar Prasad looks at how the Indian diaspora in the Middle East consumes films.

Amitava Akash Nag tells us what Bergman’s films mean to him.

Naveena Vijayan watches a gourmet film that leaves her hungry.

Kamila Kunda shares with us her passion for slow cinema.

Gayathiri considers the idea of emotional infidelity as portrayed in two films, Spanish and Tamil.

Coco introduces us to the stop-motion film Metropolis, in Chinese and English.

Unaka’s fabulous comic panel might make you watch an animated film right away; you can read it in Czech or English.

Ramakrishnan takes us on a tour of Art Deco theatres in South Mumbai.

Vishwanathan talks to those who make the magic of cinema possible—the men in the projection rooms, the ticket collector, the popcorn vendor.

Kurien visits the Golden Mile Complex in Singapore, where every kind of film-goer can find a movie to watch.

Pradheep writes in Tamil about the Chennai International Queer Film Film 2018; translated to English by Shivapriya.

An interview with the team of Tashi, an independent zero-budget film shot in Singapore.

A chat with B Prasanna, music composer/arranger/producer, founder of BP Collective, and creator of our magazine’s theme music!

… a fun feature from us, where we give you film recommendations from around the world—for many moods, and in many languages!

We’d like to leave you with this excerpt, taken from Ingmar Bergman’s introduction to the book Four Screenplays:

People ask what are my intentions with my films—my aims. It is a difficult and dangerous question, and I usually give an evasive answer: I try to tell the truth about the human condition, the truth as I see it. This answer seems to satisfy everyone, but it is not quite correct. I prefer to describe what I would like my aim to be.

There is an old story of how the cathedral of Chartres was struck by lightning and burned to the ground. Then thousands of people came from all points of the compass, like a giant procession of ants, and together they began to rebuild the cathedral on its old site. They worked until the building was completed—master builders, artists, labourers, clowns, noblemen, priests, burghers. But they all remained anonymous and no one knows to this day who built the cathedral of Chartres.

Regardless of my own beliefs and my own doubts, which are unimportant in this connection, it is my opinion that art lost its basic creative drive the moment it was separated from worship. It severed an umbilical cord and now lives its own sterile life, generating and degenerating itself. In former days the artist remained unknown and his work was to the glory of God. He lived and died without being more or less important than other artisans; ‘eternal values’, ‘immortality’ and ‘masterpiece’ were terms not applicable in his case. The ability to create was a gift. In such a world flourished invulnerable assurance and natural humility.

Today the individual has become the highest form and the greatest bane of artistic creation. The smallest wound or pain of the ego is examined under a microscope as if it were of eternal importance. The artist considers his isolation, his subjectivity, his individualism almost holy. Thus we finally gather in one large pen, where we stand and bleat about our loneliness without listening to each other and without realising that we are smothering each other to death. The individualists stare into each other’s eyes and yet deny the existence of each other. We walk in circles, so limited by our anxieties that we can no longer distinguish between true and false, between the gangster’s whim and the purest ideal.

Thus if I am asked what I would like the general purpose of my films to be, I would reply that I want to be one of the artists in the cathedral on the great plain. I want to make a dragon’s head, an angel, a devil—or perhaps a saint—out of stone. It does not matter which; it is the sense of satisfaction that counts. Regardless of whether I believe or not, whether I am a Christian or not, I would play my part in the collective building of the cathedral.